The Ankarabad Khadijha Erickson Sultani International Airport, also known as the Ankarabad Airport, is the major civilian airport that serves the city of Ankarabad. It is also a major stopping point for transfers and flight connections and serves as a hub for many airlines. It is the busiest airport in the world. The airport is named after the former Mayor during 1965-1970, Khadijha Erickson Sultani.

The Airport Opened in January of 1981 with a single terminal which is now Terminal C. It was constructed to relive stress on the Ankarabad-Aliyahgarh Airport and the then existing Ankarabad-Maranpur Airfield. It was funded by the government of the Iqabaliyah Muqataea and the County and City of Ankarabad. Part of the project with building the airport was to build a 14 mile extensions to TS 697 from the TS 95 in the Aqrah District to the airport through the Izamana District.

The Central Terminal (also known as Terminal C) is the entrance terminal for passengers entering the airport not through a flight aswell as the exit terminal to get into the main city of Ankarabad. Airport Blvd (the eastern extension TS 697) runs through the middle of the terminal which allows departure and arrival access to passengers and other people to access the airport. This was the original Terminal built and the oldest terminal in the airport. It had an extension in 2003.

The North Terminal (also known as Terminal N) was the second terminal to open opening in March 1982.

The South Terminal (also called Terminal S) is the newest Terminal which opened in 2002 and received two extensions, one in 2005 (going eastward) and one in 2012 (going southward).

The only hotel in terminals of the airport is Crisis Facility Airport though hotels do exist in an area 2 miles away owned by the airport which can hold passengers even without a visa if needed which is typically needed of people who are not citizens of Aurebeshia nations and are staying in the airport for more than 16 hours. The hotels are accessible through Metro Line 31.

The Islamic Air Crisis Department runs a hotel in Terminal C as well as assistant areas located throughout the terminal for passengers stuck in the airport due to cancellations, crime, weather, or any other factor that the department considers to be out of control of the passenger. Main Article: Ankarabad Khadijha Erickson Sultani International Airport Sky Mosque
The Ankarabad Sky Mosque is the a mosque located 1 mile away accessible through Metro line 31 to serve passengers in the Airport. While this is the main mosque there are prayer halls in the airport with some for only men, some for only women, and mixed ones as well that allow both genders.

The Airport Metro serves to connect the Terminals and Parking garages with the C Terminal where all passengers getting out or into the airport have to go through. It serves with two lines that are parallel and do not cross at any point.

A small bus system exists in the airport to serve extremely busy times when the Airport Metro gets crowded. The buses can also be used in situations where the airplane was not able to dock at a gate and passengers either need to be transported to or from the plane.

The Ankarabad Metro has a direct stop in the C terminal with the 11, 26, 30, and 31 lines at the "Central Terminal North station" with the Airport Metro. Metro Line 31 is a controlled accesses line which allows passengers to use this line as if they are in the airport.

A high speed rail station to serve the airport is located 3 miles away from the Airport which is accessible through the 31st Metro Line. 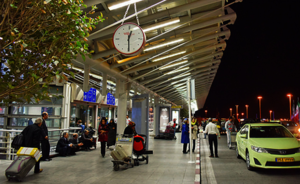 Taxis are available at many sections of the C terminal and are kept separate from private traffic in arrival areas.

Car Rental serves are offered by private companies in the C Terminal though the cars themselves are located in the Parking Garage A or in a parking garage in proximity to the airport.

Privately owned buses run through the airport located near the Northern side of the C Terminal.

The Airport is accessible directly from TS 199 and TS 695 Westbound through TS 697 (also known as the "Airport Highway" when in the Airport) in the airport.