It was founded by Emir Zahrid Ankara during the rise of Islam and was constructed to be the capital of the Emirate of Ankara. It remained an important trade city even after the collapse of the Emirate due to it's location the mouth of the Janub Sea. In 1853 it became the largest city in Greater Sacramento after over taking Asr El Ziqara and has been the largest city ever since it took the spot.

The city was founded during in 645 AD the rise of Islam under the Emir Zahrid Ankara who was from Medina Alhejaz and made it the capital of the Emirate of Ankara. When the Emirate of Ankara switched to becoming the Ankara Sultanate everyone in the city took on the title of "Sultan" or "Sultani" at the end pf their last names to signify they were from Ankarabad. Ankarabad remained the capital of the Ankara Sultanate until it was taken over by the Qunazicana Caliphate in 790 AD. During it's time under the Sultanate it was an important trading hub for the region but the city would not grow significantly until under the Islamic Republic of Greater Sacramento in 1515 AD.

After 896, the city was the major spot for Kashiludun support. When the Kashiludun Caliphate was established in 898 the city began to see population regrowth and was on pace to being one of the largest cities in the caliphate. The population exceeded 2 million in 1355 during this era. During the 1400s the city saw stagnation and somewhat of a decline and due to this many converted to Ahfariq Islam and revolution began to rise in the city.

In 1495 the Ankarabad Republican Army took control of Ankarabad and became a leader city in the Blue Flag Revolution. The cities control grew until after the Conference of Asr El Ziqara where the local democratic armies united into the United Front for Islamic Democracy. In 1500 after the overthrowing of the Kashiludun Caliphate the city was mostly untouched by battles unlike Chaqaz and Fez.

Under the Early Islamic Republic

The city under the new Islamic Republic started to see population gain rapidly. The Ankarabad Stock Exchange was established in 1555 and in 1765 the population grew to 5 million and the city became the largest in Greater Sacramento. This was due to the city being at the entrance of Naztum Sea, the Janub Sea and the Eastern Ocean making it the entrance to all other major ports in Greater Sacramento.

During the the 1800s and 1900s the city saw extreme industrialization. The pollution in the city was reported to have been extremely bad to looked like fog. As this was a common problem in cities like Qahrdoba, Medina Alhejaz, and Ibrahamshah the Sacramatian Government installed environment regulations in 1966 and this resulted in Ankarabad being a cleaner city.

Today the city is the second largest city in the world only behind San Salvador in Creeperopolis. It hosts over 40 million people and is classified as an Aurek ++ city by the Globalization and Terraconserva Cities Research Network. The city's Amatullah El Medina Sultani International Airport is the busiest in the world due to it's geography and ability to connect the flights from Creeperopolis to Quebecshire and from the western cities of Eminople, Wildavie, and New Gandor to the western of the continent. It also hosts leading areas of the Sacramatian IT industry.

Fashion in Ankarabad conisist mainly of the traditional Azumankan styles. Women wear loose, shapeless dresses while men tend to wear coats and other cold weather essentials as Ankarabad is the coldest city in Greater Sacramento. The Burqa has come back into fashion since 2010 and many women choose to veil their face to this day though many will slip the mouth covering part off when indoor. 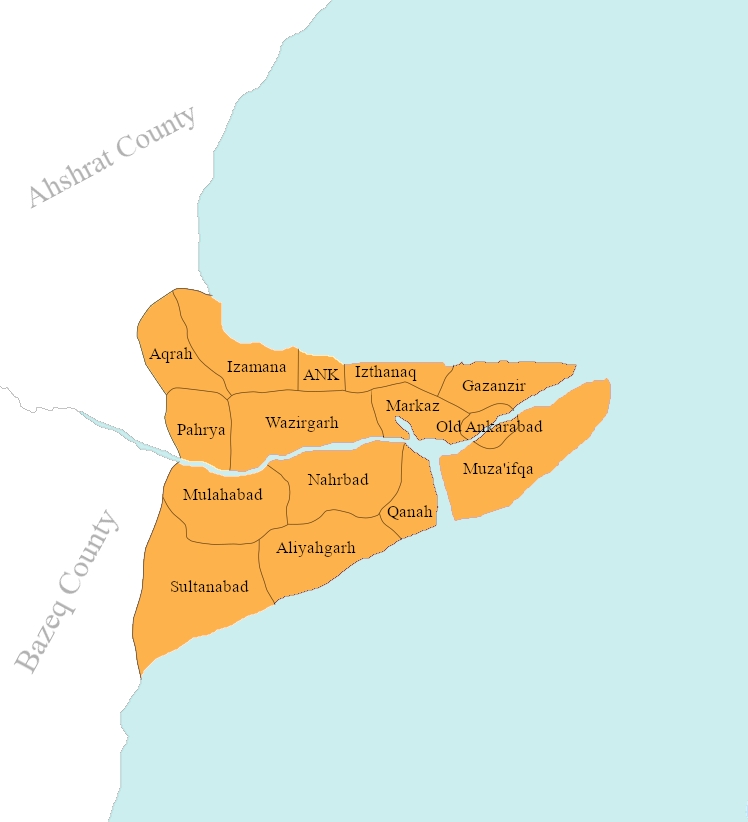 The Old city of Ankarabad is located around the Ankarabad Channel. It hosts one of the oldest Mosques in the world, the Emir Zahrid Ankara Mosque which is the center piece for the old part of the city. The old city also gave birth to the tradition of Sabbayitha or Sacramatian Christmas. It was created during the rise of Islam when merchants brought Islam from Medina Alhejaz to the area. One merchant started his own kingdom, the Emirate of Ankara and constructed this old city. Today it is the most densest are of the city and the oldest as well with notable cities being the Emir Zahrid Ankara Mosque, the Ankarabad Town Square, and the Palace of the Ankara Emirs.