Aiden Bank (AB) is the central bank of the Federation of Karimun. Augusto Paramorra is its current governor. 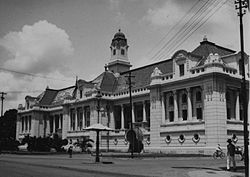 The office of Aiden Bank in Johenavi, presently the Museum of Finance

King Walter IV of the Kingdom of Karimun granted the right to create a private bank in Karimun in 1826 which was named "Bank Jawa" or "The Javan Bank". It was founded on January 12th, 1827 and later became the circulation bank of the United Kingdom of Karimun. The bank regulated and issued the Karimun Aiden.

The Javan Bank was operated as a private bank and individuals - without the Monarch intervention - as well as industries etc could get help in the bank's offices.

Then the Javan Bank was nationalized by the then President Marius Korvan on July 1, 1950, three years after the birth of Moderan Karimun Federation.

For the next 15 years, the Aiden Bank carried on commercial activities as well as acting as the nation's national bank and is in charge in issuing Karimunese Peta currency.

This came to an end with the Korvan's Nationalization Law on the Central Bank, which was subsequently replaced by Legislative Law of Central Bank in October 1965, giving the bank independence. 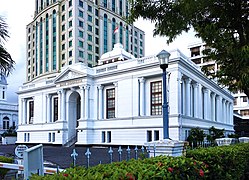 The office of Aiden Bank in Giovanni after 1978

Thereafter, the bank reported to the parliament (DPR) instead of the President, and the bank's governor was no longer a member of the cabinet.

the Bank describes its strategic objectives as being: