From LCN Wiki
Jump to navigation Jump to search
Template:SHORTDESC:

Adolfo III of Creeperopolis (Full name: Adolfo III Alexander Martínez Schuessler; 3 April 1803–1 December 1887) was the reigning Emperor of Creeperopolis and the Creeperans from 1833 to 1887. He rose to power in the Revolution of 1833 which deposed Emperor Manuel IV.

He has posthumously been called Adolfo the Great, especially in the 21st century.

In his childhood, Adolfo lived within the Salvador Palace under the de facto house arrest of Manuel IV, his granduncle who defeated his grandfather during the War of the Creeperian Succession. He, along with the rest of his immediate family, was rarely allowed to leave. His grandmother, María, died under suspicious circumstances in 1806, and her funeral was held in Salvador. Adolfo attended the event, one of the few times he would leave the palace. 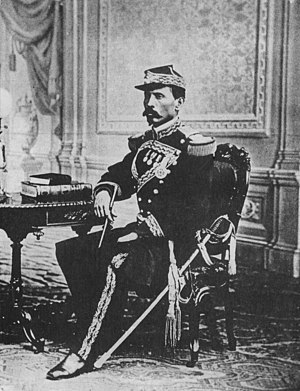 From 1810–1822, Adolfo began to take an interest in the military history of Creeperopolis and had aspirations to become a military officer in the Imperial Army. He made a request to become an officer in the army, and after denying him three times prior, Manuel IV reluctantly allowed him to join the army.

Adolfo enrolled in the Imperial Army in 1822 and began as an Lieutenant, the lowest officer rank. Adolfo attended the Adolfosburg Military Academy where he was educated in military history, tactics, and skills to be promoted to Captain, which he was in 1826 after finishing his education. He was stationed in Helam, just south of San Salvador.

Adolfo married the daughter of the Emperor of Castilliano, Isabela Hernández Guerrero, on December 28, 1822, and they had their first child, Prince Maximiliano Adolfo Martínez Hernández, on June 18, 1824.

Adolfo was promoted to Major in 1829, but he wanted more. He was of royal descent, and he demanded that Manuel IV promote him to a higher rank. Manuel IV submitted and promoted Adolfo to Lieutenant General in 1830, the third highest rank, after General and Field Marshal.

As a Lieutenant General, Adolfo gathered a following of soldiers who supported him, and many wished to establish him on the throne, as Manuel IV was growing old and was becoming an unpopular Emperor. Soldiers in the army began to only take orders from Adolfo by 1833. Manuel IV had enough of what he believed to be a mutiny against his orders, and stripped Adolfo of his rank and kicked him out of the Imperial Army on 12 June 1833.

Upon hearing of the firing of Adolfo, many Generals and Field Marshals grew a bad taste for Manuel IV and defected to the cause of Adolfo. Adolfo had begun to rally up supporters in Helam and began marching his troops to San Salvador on 13 June.

Manuel IV realized that the military is turning against him and orders for Adolfo's arrest, along with the arrest of any supporters. Manuel IV had Field Marshal Fidel Amaro Sánchez order the troops following Adolfo to arrest him, but the soldiers refused to listen. Amaro was then arrested by Adolfo's soldiers and executed via firing squad, marking the beginning of the Revolution of 1833.

Miguel Cabañeras Gutiérrez was essential to Adolfo III's ascension to the throne.

Upon hearing the death of his most loyal Field Marshall, Manuel IV ordered the palace guards to arm themselves and defend the Imperial Palace of Creeperopolis to the death while he and his family hid within the palace preparing for the end, as the entire military has turned against him.

Adolfo recruited the help of Miguel Cabañeras Gutiérrez, a former Field Marshal who fought alongside Salvador III during the War of Succession, to depose Manuel IV from power. Adolfo promoted Miguel to Chief Field Marshal, signaling to the soldiers and officers that Adolfo is declaring himself as the true Emperor of Creeperopolis.

The soldiers arrived at the Imperial Palace at 12 noon and began to fire at the palace guards defending the palace. The well trained soldiers overwhelmed the outside defenders and infiltrated the palace. Cabañeras declared that no-quarter will be given to the palace guards, leading to very heavy guard fatalities.

The army had secured the palace by 3pm and had Manuel IV and his family captured and arrested.

At 3:30pm, Adolfo had Manuel IV and his heir, Grand Prince Manuel Martínez Figueroa, executed to prevent any claimant from Manuel IV's lineage arising to challenge his own power. The rest of his family was placed under house arrest and moved to the Salvador Imperial Palace, where Adolfo had been held prisoner throughout most of his childhood.

Later that day, Adolfo III was given a letter from Pope Gregorio XVI himself congratulation him on his rise to power. He hopes that Adolfo III can revive and strengthen Creeperopolis's Creeperian Catholic heritage.

On 18 February 1834, Adolfo III authored a manifesto called the Creeperian Investment into Natural Resources Gifted by God. His manifesto called for Creeperian workers to help the government mine gold, iron, and silver in the griund of the nation to help industrialize the nation. He claimed that God himself ordered him to write his manifesto and that God wanted all Creeperans to mine these minerals. The mainfesto gained popular support quickly, and on 17 August 1834, Adolfo III established the National Mining and Smelting Corporation, a massive conglomerate composed of subsidiaries which focus on mining and smelting iron, gold, and silver. Abbreviated as CORNAMIF, the corporation was given a monopoly on the Creeperian mining industry. 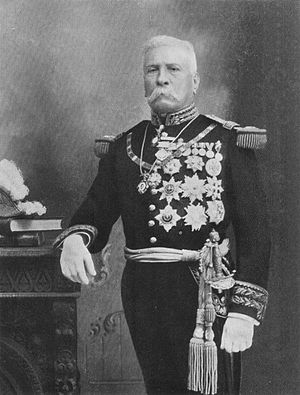 Senvar was absorbed into Creeperopolis on 5 March 1839 and Adolfo III was declared King Adolfo I of Senvar. Wilhelm III was given compensation by free residence at the Palace of Puerto Sonsatepan and Adolfo III promised that he and his family will be cared for. He gave Wilhelm III power over the administration of Puerto Sonsatepan as a vassal to him.

The Creeperian Army's superior numbers, experience, and organization proved to be its greatest strength against the Senvarians' lack of combat skill, smaller numbers, and lack of any sort of organization and unity. His troops' unity was exemplified during the Siege of Südhafen where his soldiers, despite outnumbered two to one, overpowered the Senvarians defending the city and its walls after four months of siege.

Adolfo III's army's greatest weakness was its lack of knowledge of the Senvarian landscape and terrain. The thick forests were perfect hideouts for insurgents to retreat to and rest only to prepare to attack the Creeperans over and over. The Senvarians mainly used guerrilla tactics which greatly reduced the efficiency of the Creeperian Army.

In the end however, the Creeperans triumphed when Frederick Schuessler I was killed in the Second Battle of Puerto Sonsatepan in 1857. Over the course of the year, the Senvarians surrendered and accepted Creeperian rule. In return, Adolfo III agreed to enforce the Creeperian Constitution's granted autonomy the departments of Senvar and Sonsatepan. 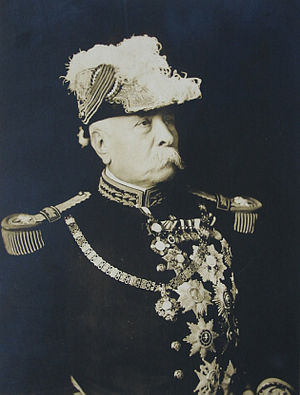 Following his military triumph over the Senvarians, Adolfo III looked to the northwest and set his sights on a conquest of the Salvadoran Kingdom.

The kingdom was surrounded on all sides by mountain ranges providing it protection from invasion. The kingdom itself lay in the Salvadoran Valley with its capital, Ciudad Los'Ángeles, lying on the Granada River.

The insurgency was unpopular among the Creeperian populace and the people began protesting the war in 1881 demanding for it to end. Adolfo III ignored the people and continued the war.

The people began calls for the establishment of a second Parliament.

Adolfo III died on 1 December 1887, from a stroke in the San Salvador Imperial Palace. He was succeeded by his son Maximiliano II. Maximiliano II accepted the peoples' cry and called for a cease fire to the war and arranged elections for a Second Parliament. The war would officially end on 3 October 1888, and Senvarian and Sonsatepanian autonomy was restored. 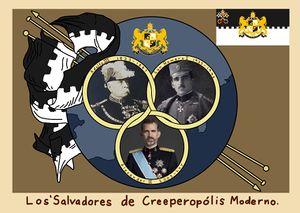 Creeperian propaganda from September 2019 made following a failed attempt by Malgax to sanction Creeperopolis. The propaganda piece was further pushed following the start of the Deltinian Insurgency in December 2019.

During the Second Parliamentary Era of Creeperopolis (1887–1933), Adolfo III was portrayed as a cruel tyrant and was viewed negatively by 60% of the Creeperian population, with only 35% viewing him favorably.

However, during the Creeperian Civil War, the Romerists portrayed Adolfo III in a positive light as an Emperor of the people and an Emperor of freedom and Catholicism.

After the 2003 Creeperian coup d'état, the government of Alexander II, under orders of Augusto Cabañeras Gutiérrez, compared the coup of 2003 to the Revolution of 1833, a victory for Creeperopolis and a defeat for tyranny and oppression.

Adolfo III has been posthumously called "Adolfo the Great."