The 2022 Ostlandet attacks, also known as the 2022 Ostlandet Terror Ring, are a series of attacks that occurred in the nations of Gjorka, Paleocacher, Reia and Ajakanistan on August 1, 2022. The attacks occured in a variety of forms at around the same time in the morning from 6:14 a.m. with a train derailment in Bullmar, Paleocacher, to 4:30 p.m. with a bombing at the International Tower in Toboshi, Ajakanistan. The attacks left 32 people dead, and nearly 500 more wounded. The attacks were carried out by various groups led by a unknown internet figure named "The Ringmaster".

The attacks began in Bullmar, Paleocacher at 6:14 a.m. when hackers took control over railway controls causing a train carrying cargo and passengers to de-rail leading to multiple injuries and two deaths. Next, an unknown assailant took control over a control tower for a drawbridge in Chicajun, Paleocacher while a grain freighter passed underneath. The assailant then dropped the bridge onto the ship causing injuries and a fire to erupt on board. At the same time, at the University of Paleocacher in Cork a shooting began in the University Plaza and Laramie Park as a shooter fired from a clock tower overlooking both. The shooter killed 6 people and injured 9 more before being killed by Police. At 7:45 a.m. in Tanjō, Reia assailants entered the downton train station and threw containers full of an unknown toxic gas as a train were disembarking. The gas injured several commuters but no deaths were reported, and the assailants have not been not found. At 10:30 a.m. in Broadford, Gjorka, in the middle of a protest organized by the Khoroshiyan Civic Initiative and a counter-protest organized by the National Social Party, a car bomb exploded killing at least 20 and injuring hundreds. The car bombing was the first to occur in Gjorka since 1972. Finally, at 4:30 p.m (3:30 AST) an explosion rocked the International Tower in Toboshi, Ajakanistan during a meeting between Silayev Artemovich the Governor of Tobosk and assailants posing as IKEA representatives.

The first attack began at 6:14 a.m. (AMT–12) when hackers infiltrated the dispatch for Bullmar Yard in Bulmmar switching the train from it's normal route to another track. This was quickly detected by security software who reverted the train back to it's original course, but only after one train car had passed over it causing the train to suddenly brake and de-rail. This de-railing stopped movement in the yard completely causing significant delays within Paleocacher's train system.

The next attack occurred at the Trenton Avenue bridge over the Industrial District Canal in Chicajun, Paleocacher as an assailant took control over the drawbridge's control while a ship was passing underneath causing the bridge to collapse directly on the ship. This caused severe damage to the ship's bridge and smokestacks and caused a fire to erupt on board. The resulting fire impaired emergency authorities from properly reaching the ship.

Around the same time as the sabotage in Chicajun, in Cork, Paleocacher an assailant dressed a maintenance officer entered the clock tower of Administration Hall at the University of Paleocacher. The Clocktower had an overlook of the University Plaza and a park across the street. Once reaching the top of the clocktower, the assailant pieced together a disassembled sniper rifle sewn into his maintenance uniform and opened fire on the park and plaza below. Police units responded quickly, and the man was shoot dead by a local tactical squad officers responding from a helicopter.

At 07:45 a.m. in Tanjō Station located in the city of Tanjō, Reia two assailants in the station tossed six devices into a crowd of commuters departing and waiting to get on an arriving train. The devices emitted a unknown yellow gas that caused asphyxiation and vomiting. Mass panic ensued causing multiple tramplings as commuters attempted to leave the station.

At 10:30 a.m., a car bomb exploded in the middle of a protest between the Khoroshiyan Civic Initiative organized protest over the deaths of seven Khoroshiyans in a botched police raid and the counter-protest against them led by the National Social Party. The explosive immediately caused the crowd to start running away frantically creating multiple further injuries from trampling. Firefighter units and Paramedics were already nearby in preparation for possible riots and reacted quickly to the explosion. Garda officers were able to secure the area around the bombing shortly, and ordered an evacuation of all buildings within a one mile radius of the blast site.

The final attack began at 4:30 p.m during a meeting between the Governor of Tobosk, Silayev Artemovich, and assailants posing as representatives from IKEA in the International Tower in Toboshi. During the middle of the meeting, one of the representatives left to go the bathroom and around 10 minutes later three suitcase bombs were activated around the Tower. The bombs caused significant damage to the structural integrity of the building, and started a massive fire. The security detail for the Governor escorted him out quickly allowing him to reach a hospital quickly. Emergency Response Units arrived quickly shortly after.

The attacks left casualties throughout Ostlandet causing the deaths of 39 people and injuring 519. Most of those who died were civilians as they were in the intended targets of the attack. The attacks in Chicajun and Tanjō left no deaths, however a combined 29 were still injured. Included in 40 deaths is the mass shooter in Cork who was killed by police.

In Paleocacher, the attacks caused 9 deaths and 40 injuries and were the most widespread of any country with three separate attacks. In Bullmar, the intentional de-railing caused the death of one engineer and passenger while injuring dozens more. The sabotage of a bridge in Chicajun caused multiple injuries as the affected ship caught on fire, however it resulted in no deaths. Finally, the shooter in Cork managed to shoot 15 induvial before being killed by local police. Of the 15 shot, 6 died on the scene or in the hospital while the remaining 9 survived their injuries.

The attack on Tanjō appeared unique in the attacks as it was the only attack that appeared to not intend to leave casualties. The unknown yellow gas released caused asphyxiation and vomiting, but was not severe enough to cause death. 21 individuals were sent to the hospital as a result of the attack.

Following the bombing in Toboshi, the local police reported 7 killed in the attack and a further 25 injured. Governor Silayev Artemovich, the likely target of the attack, survived in critical condition despite being close to the bomb. It is unknown if any of the assailants were killed in the attack.

The bombing in Broadford was the most severe of the bombings as caused the most deaths and injuries by a significant amount. Following the explosion, 19 protestors were killed on site with a further 5 dying in the hospital. 433 were admitted to local hospitals as a result of the attack. The bombing was the deadliest in Gjorka since the 1975 Gjorka City shooting which left 27 dead. Of the 19 killed, 17 were protestors while a further 2 were Garda officers. A vast majority of the four hundred injured were protestors, but nearly all Garda officers present reported injuries. Many of these injured were injured in trampling from running crowds in response to the attack. 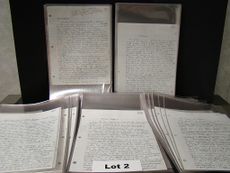 Printed version of the Manifesto published by the Ringmaster

In the initial hours and days following the attacks there was significant confusion over who was responsible for the attack as no group claimed responsibility. On August 5, four days after the initial attack, a unknown internet figure known as the "The Ringmaster" published an online manifesto claiming responsibility for organizing groups to carry out the attack. Following the arrest of fellow perpatrator, Ruslan Burlaka by the Garda Gjorkan, the identity of The Ringmaster as Bullmar City University psychology professor Thomas McGowan‎.

Gjorkan President Carter Morris alleged in a televised speech that the Domestic Security Service (SSB) believes the Front for the Liberation of Khoroshiya or affiliates perpetrated the bombing in Broadford. As well she announced that the Department of Justice is currently investigating the Khoroshiyan Civic Initiative and the Khoroshiyan Anti-Fascist Assembly for alleged involvement. Despite these claims, the Front for the Liberation of Khoroshiya stated they did not perpetrate the attack in a statement to the Gjorka Times.[1]

The Toboshi City Police alleged the attack in Toboshi was perpetrated by Cherzians, specifically former members of the Cherzian Military citing the faces of the representatives allegedly being traced to members of the military and websites found online detailing plans for the attack. [2] The Police in a later report specified they believed the Defense Armed Union of Cherzia was the perpetrators of the attack following the arrest of one of their members. [3]

The left wing conspiracy site El Faro alleged the attacks were committed by the Creeperian National Intelligence Directorate (DINA) and were connected with the 5 June attacks whom they also claimed the DINA helped perpetrate. [4]