The 2019–2020 Morovan crisis[note 1] was a state of heightened military tensions and conflict between Morova and a coalition of various nations which was primarily concentrated in the Glaceis Ocean, but also spread to all three continents. Beginning in August 2021 with the overthrow of Supreme Leader Dmitri Rameus by Marshal Fyodor Ivanovich, a civil war eventually occurred in Morova in September and October 2021 and caused the Terraconserva Council of Nations to pass TCN Resolutions 001 and 003 against Morova.

Following a seizure of power by Admiral Alyosha Karamazov, Morova began to antagonize several nations, including members of the International Coalition for Morova (INTCOMOR) and Creeperopolis.

Declaration of Independence of Zion

Withdrawal of recognition of Morova

Battle of the Glaceis Ocean 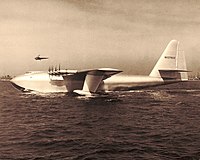 A H-4 Hercules similar to the one involved in the shootdown.

Sinking of The Lady Kieva

TCN Resolution 001 – Condemnation of the People's Republic of Morova

TCN Resolution 013 – Prohibition of Petroleum Sales to and from Morova

TCN Resolution 014 – Mandate for the International Trial of Alyosha Karamazov

TCN Resolution 016 – On the Subject of the Island of Morova